A tour to provide the essence of the country including 3 nights in Paro and 2 in Punakha with base on COMO hotels.

Arrival to Paro, customs procedure and luggage collection. Welcome by your private ENGLISH speaking guide followed by a 10 minutes transfer to our accommodation: Hotel COMO Uma Paro.
During this first day, we will have the opportunity to travel through the valley of Paro, visiting its small town, as well as its most representative temple. Dinner included in the hotel.

Paro-Thimphu-Dochu La-Punakha. Breakfast at the hotel. Early in the morning, we will leave by road to the city of Thimpu, capital of the Kingdom of Bhutan, where we will first enjoy the wonderful views of the valley and the spectacular Dzong Trashi Chhoe, followed by the opportunity to enjoy fabulous visits during the morning including the statue of the Buddha Dordenma, Chorten National Memorial and the Folk Heritage Museum. Lunch included.
In the afternoon, we will continue our journey through the winding local roads, ascending to 3000m above sea level on the Dochu La pass, which will offer us beautiful views of more than 108 images of Buddha, with an incredible mountain landscape, especially on clear days.
From there, we will continue down the valley, entering Punakha, where our accommodation will be located: the COMO Uma Punakha Hotel. Accommodation and time to rest with dinner included.

Breakfast at the hotel. Early in the morning, we will begin a full day of exploration through the exuberant valley of Punakha, which at 1,200m above sea level always has a warmer climate and in which, among others bananas and oranges are easily grown. The morning begins with a short walk through the farms and rice paddies to reach Chimmi Lhakhang, a fifteenth-century fertility temple dedicated to Drukpa Kuenley, a Tibetan Buddhist saint, perhaps better known as the “Divine Fool”. This site has long been a pilgrimage for couples who want to start a family.
Going deeper into the valley, the 300-year-old Punakha Dzong appears. The fortress, built in the 17th century by Zhabdrung Ngawang Namgyal (who founded the Kingdom of Bhutan), once housed the government of the country and is now the winter home of Je Khenpo, the chief abbot of Bhutan, along with a retinue of 1,000 monks.
Lunch included in the hotel.
After lunch, the tour will take us on a walk through the farms and farmland to Khamsum Yulley Namgyal Chorten, a Sanctuary recently built by the royal family.
Return walk to the hotel and dinner included in the hotel.

Soon after an early breakfast at the hotel, we will leave the Punakha valley, retracing our steps through the pass of Dochu La, where we will have a second chance to see the Himalayas.
Returning to the Chuzom (the confluence of the Wang Chhu and Paro Chhu rivers), we will glimpse the three nearby sanctuaries which were built to protect the evil spirits, each with a different style of architecture: Nepalese, Tibetan and Bhutanese. We will stop at Tamchog Lhakhang, a temple built by Thangtong Gyalpo, a pioneer engineer who introduced the construction of suspension bridges in Bhutan and Tibet (several of which are still in use today). The final part of the route to the hotel COMO Uma Paro is through apple trees and rice fields back to our mountain house, where we can spend the rest of the day in this peaceful environment.
An interesting alternative for that free afternoon would be the popular option to try your luck with archery, Bhutan’s national sport.

Breakfast at the hotel. The historic Paro Valley is the center of the activities of our last day of visits, which culminates with a visit to the ‘Tiger’s Nest’, also known as the Taktsang Monastery, one of the most important architectural pieces of Bhutan. According to legend, this cliff is where Guru Rinpoche (Padmasambhava) landed on the back of a flying tigress, taking Buddhism to Bhutan from Tibet.
The trip starts early to avoid the heat of the sun during the two-hour climb to the “Tiger’s Nest” viewpoint, a steep walk past a waterfall and ending between beautiful murals at the main entrance of the monastery. If time permits, there is the possibility of going further to visit other remote temples. After lunch (included, either a Picnic or in the charming Taktsang café) we will head back to the hotel, where we can rest and enjoy the facilities of the hotel, as well as one of the COMO Shambala treatment (included) for this afternoon.
Dinner included in the hotel.

Breakfast at the hotel. Free morning before private transfer to the airport for the return flight 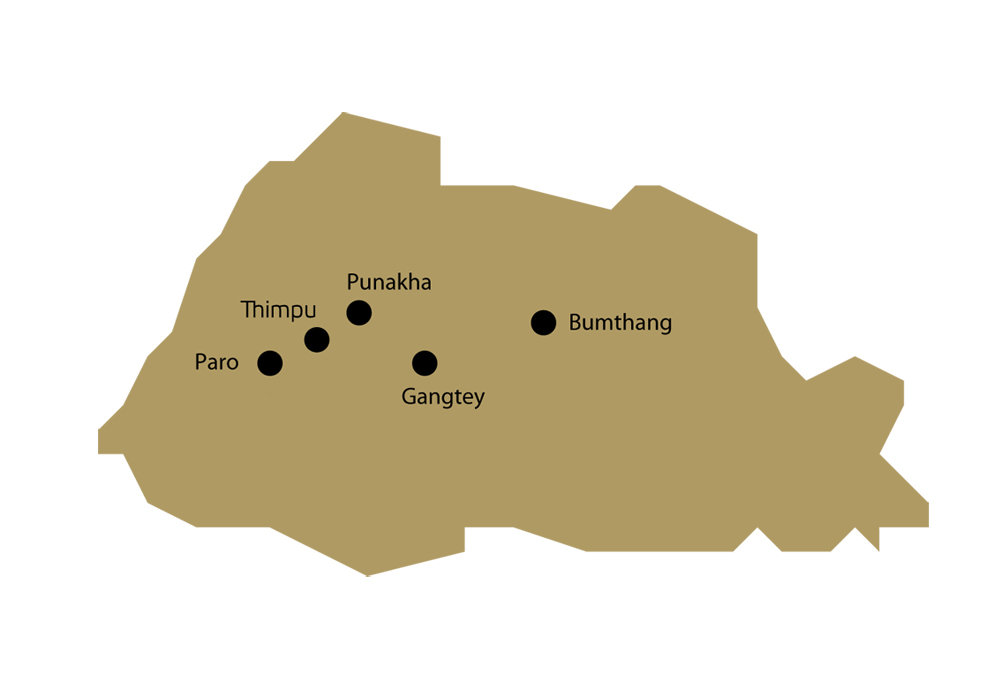