A tour that combines the country’s culture with wild nature. One night in Negombo, three in Sigiriya-Dambulla, one in Kandy, one in Nuwara Eliya, one in Yala, two in Galle and the last night in Colombo.

Arrival at the Bandaranaike International Airport in Colombo, customs formalities and baggage collection followed by transfer with the assigned guide to the chosen hotel either near the airport, in the coastal town of Negombo or in a colonial village inland. Check-in at hotel and rest. Depending on the time of arrival, there will be a first contact with the country, visiting a small fishing village.

After breakfast at the hotel transfer by road to the north. Our first stop is the elephant orphanage of Pinnawella, about 90 minutes away. At certain times of the day the baby elephants are bottled fed, before enjoying their bath. We will continue our route by car (about 3 hours) to the cultural heart of the country, in the towns of Sigiriya, Dambulla and Polonnaruwa. At the end of the visit transfer to the chosen hotel in the area.

Early morning and if the weather permits (November to April), optionally, we could fly in a balloon over this beautiful area, full of lush vegetation where shines the Sigiriya Rock, old Palace of King Kasyapa. After breakfast at the hotel we will drive to the base of the rock. The more adventurous could climb the nearly two thousand steps leading to its summit. The site is a World Heritage Site since 1982. In the afternoon, we will enjoy the lush woodlands of the area, on the top of an elephant. Accommodation at selected hotel.

Breakfast at the hotel. This day will be dedicated to explore the remains of the ancient capital, Polonnaruwa, like Lankatilake, Tivanka, Thuparama and Gal Vihare, among many others. The latter has four Buddha images, carved in stone, two in meditation, one standing and another sitting. Polonnaruwa meets, undoubtedly the best art complex of the whole island. In the afternoon we will visit the caves of Dambulla, some of
them from the the 1st Century B.C, which has numerous statues of Buddha.

After breakfast at the hotel we will drive to Kandy, about 90 kilometers, two and a half hours drive. Check-in at the selected hotel. In the city of Kandy we will visit the Botanical Gardens and the Temple of the Tooth of Buddha, dating from the 17th century. We will witness a Kandyan dance show. Kandy is the holiest city of the island and it is located in a beautiful mountain setting. Is famous for its craft shops, woodworking, silk and big jewelry.

Breakfast at the hotel. Two hours drive to Nuwara Eliya, less than 90 kilometers away. En route, we will visit a tea plantation and learn more about this valuable product of the country and its development process. Sri Lanka’s tea is one of the most valuable in the world. Nuwara Eliya is considered the “Little England” of Sri Lanka. It is in a mountainous area where the water takes on a great importance and includes beautiful waterfalls that can be seen in their environment.

After breakfast at the hotel we will continue our journey to the south towards Yala National Park, about 300 kilometers away and five hours driving. On arrival we will enjoy a safari in the early afternoon. It is the ideal time to see the animals in their environment. If we are lucky we will see leopards, elephants, wild buffalo, deer … The place is truly wild and is bathed by the Indian Ocean, surrounded by jungle, lagoons and rocky areas. Overnight at hotel.

Breakfast at the hotel. 158 kilometers away and about 4 hours by car there is Galle, which will be our next destination. It is the largest city in the south of the country and was occupied by the Portuguese in the 16th Century, by the Dutch in the 17th Century and finally by the British in the 19th Century. All these people have left their mark on this city. We recommend cycling or walking along the Dutch fort area and tour its streets and shops within the walled area.

Breakfast at the hotel. Free day to wander through this beautiful city. From November to April, you can optionally organize a boat trip for whale watching.

After breakfast at the hotel we will drive for about four or five hours to Colombo, the capital of the country, located about 180 kilometers away. On arrival, check-in at the selected hotel followed by a panoramic tour around the city. On a typical tuc-tuc, we will visit its markets and streets where we could make the last minute purchases.

Breakfast at hotel. Transfer to the airport for departure. 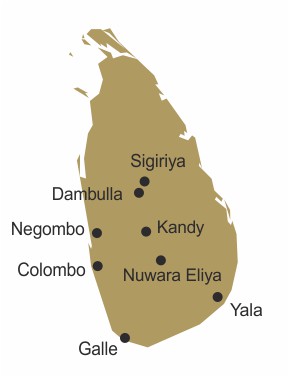 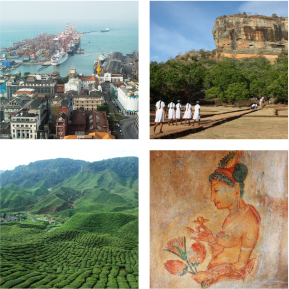